Hear are a some articles about Keshet in the Press.

CHECK OUT THIS AWESOME PROGRAM! 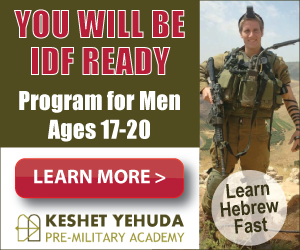 95% of our graduates have remained committed to true Jewish values throughout their army service and beyond.

More than 90% of our boys go to combat units, 40% become either commanders, officers or members of special forces units.

To our sorrow 11 boys have sacrificed their lives in the line of duty.

“The Keshet Yehuda Pre Military Academy is in the center of action, a center of influence. We see the graduates of the academy in every combat unit, in all the elite army, navy and air force units and in command positions. Everything they do is for the good of the State of Israel.” ~ General Tal Russo, Chief of Southern Command, IDF